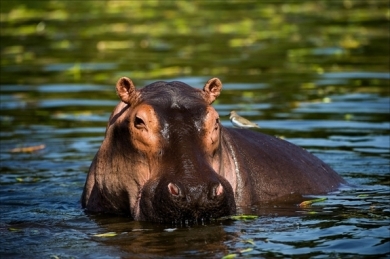 Some people have nightmares about falling off buildings. They wake up in a cold sweat and upon realizing it was only a dream, take a deep breath of air and roll over and go back to sleep.

My nightmares were Hippos. After living in Africa near the Okavango Delta for many years, I have seen my share of damage that the Hippo can do. They aren’t a bit like the cute little stuffed animals you see in the Disney store! More people are killed by the Hippo than any other animal in Africa. The hippo is responsible for more human fatalities in Africa than any other large animal. When we first moved to Maun, there were regular occurrences of hippo attacks. They used to roam near the river looking for vegetation to eat near where we lived and there were times when they would encounter us humans. Generally speaking, they just attack predators, including people, they don’t eat them since they are herbivores.  Once a man tried to take a stick and chase the menacing hippo out of his yard. The consequences were fatal for the man, and for his friend who tried to save him. After that there were shotgun sounds for a full day near the river where the horrid thing happened. Eventually, the local BDF (military) were able to eliminate the creature. Those are sounds that one doesn’t get over easily.

At the time, my 2 boys were small. The mothering instincts were at their peak! So, for the longest time, nightmares of my children having encounters with hippos would torment me. Usually, it was a case where I could see the dangerous hippo before my kids could and always, just before the attack, I would wake up with a scream out to the kids to get out of there!! In my dreams they could be anywhere my children were. It was terrifying! When I had our 3rd son, Mason, we were living right on the river during a drought. There were 32 hippos who were scraping by, trying to survive. They would crash down the fences and make their way outside our bedroom to the dying fruit trees and the hippos would graze at night in our yard, standing up on their hind legs to reach the last of the green leaves.

One night, my mother in law heard something near the long, narrow window in our passageway. She pressed her nose up against the glass to see what it was and to her surprise; she was nose to nose with a giant hippo! She spoke to it and whisked her hand saying, “shoo, shoo!” and it turned and left quietly.

Another time, Andy, our black lab was running next to the river. Barney, the gold lab, was a lot smarter than Andy and kept a safe distance from the river that was teaming with Crocodiles and hippos. Andy decided it was time to play and he went out to the center where the hippos and their calves were congregated. I happened to be looking out the living room window when all of a sudden, I saw Andy jump on the back of one of them! You can read here for the rest of that story!

My fear of the hippo just got worse as time went on! There came a time when I realized that this was just not healthy. Being so terrified of anything, much less something I had to see every day was too much. Never mind the terrible nightmares I had on an ongoing basis!  I decided it was time to talk to God very seriously about this! I don’t know about you, but I wait way too long sometimes before I think something is “serious enough” to take to God in prayer and ask for His help.  I talked to him just like a child would to his parents pleading to remove this horrible fear from me.

After that, it just became less and less! I don’t like, go swimming with them like Andy did, but I noticed over time, that it just faded away. Until………

other pics found on bing.com

Everyone has fears they have to conquer. When we moved to Africa, over 25 years ago, there was a lot we could have been afraid of. We had a house in the middle of the bush. It was a rental and part of a cattle farm at the back of the property. During our 2 years there, we encountered a number of things that would send chills up your spine. We had a black Mamba slither across the floor next to our toddler, the sound of scorpions in the ceiling, baboons helping themselves to my vegetable garden. Jerry became a craftsman at killing aggressive snakes when they came around. One pound on the head and they die pretty fast. But there was one thing that Jerry, my brave husband, WAS afraid of and that was the gecko, the cute little lizard that helped out the mosquitos in the house.

One day, he made up his mind he was going to overcome that fear. So, he saw the little guy on the wall and mustered up enough courage to go and take it with his own bare hands and squeeze it till it was dead. If you are a conservationist, forgive us, but this was a big deal to him at the time. Heck, he may freak out when he sees this story! From then on, the little creatures were free to live amongst us and do their job in our home. Even now, when I jump after seeing an even heartier version where we live he won’t let me send Cleo, our Jack Russell after it.

A few years later, when the first two of our boys were still young, around 10 and 12, we were in Vic Falls, Zimbabwe with a team of over a hundred 100 from Global Adventures. We hosted their groups every summer for fifteen years. It was great seeing the young people have an awesome adventure trip, following 3 weeks of hard work in the villages, serving in various ways and learning about the rich culture of Botswana. They did everything from Bungee jumping off the Vic Falls Bridge, microlighting over the falls, white water rafting and gorge swinging.

The gorge swing is a combo of a bungee jump and free falling with a 3 point harness for about 100 meters then swings across the huge gorge of the falls then up and down again till you land next to the Zambezi River.

My boys are very different from one another. Remick, the firstborn is an all or nothing kind of guy, looking for the extreme adventure in everything he does. Jordan, the second born, is the cool, laid back, thinker son. It has to have logic and good reason if he is going to do it. But on this particular day, somehow, his brother and dad talked him into doing the gorge swing that I just described. Remick and Jordan were strapped together, tandem style, and at the count of 3, I saw both of my boys take the step over the edge and I held my breath and said a prayer. My heart was racing and I wondered if Jordan would ever speak to us again. As I steadied my hand with the oversized video cam of its day, as they reached their final destination, I heard a little voice from the little spot far down the gorge scream. It was Jordan, with both fists triumphantly in the air, screaming, “I’ve conquered my fears!”

Do you have a fear today, something that paralyzes you? I challenge you to face that thing, and give it a good kick!

When faced with challenges David, the shepherd boy who became a king, once said, “ Hear my cry, O God; Attend to my prayer.  From the end of the earth I will cry to You. When my heart is overwhelmed; Lead me to the rock that is higher than I.” Psalms 61:1,2

And Paul, the Jesus hater turned Jesus follower, said this:

“Yet in all these things we are more than conquerors through Him who loved us. 38 For I am persuaded that neither death nor life, nor angels nor principalities nor powers, nor things present nor things to come, 39 nor height nor depth, nor any other created thing, shall be able to separate us from the love of God which is in Christ Jesus our Lord.”

You plus God equals conqueror!