Cleo looks like a Queen. She has distinctive marks around her eyes that give the that Cleopatra look. But don’t let that fool you! She is sharp, cunning, precise and just like most of her Jack Russel breed, thinks she can conquer anything! She has cornered Cobras, Mambas, Puff Adders and of late, she thinks she can conquer the Majestic Eland, the largest antelope in the world. These giant creatures graze just outside our yard and she has now added this to her usual “snake bark”. So I never know if it is a snake or an Eland, so I go and check it out. They are not bothered by her fierce barking, but once and a while will give her a charge. But that doesn’t stop her. I have a distinctive snake scream that my husband and kids know me by, but mostly it is me screaming at Cleo to stay away. She is truly fearless. Telling her to back off is impossible so why do I try?

A few minutes ago we were sitting on the couch when I noticed her eye catch something high in the thatch roof above our heads. It was a HUGE 6 inch Gecco! It is the very one that day before yesterday I caught with my son Jordan in the pantry. The boys begged me not to kill it. After all they eat mosquito’s and spiders. (comforting) But I decided it had to go outside. I trapped it with a bucket and we let it loose outside my bedroom window (dugh) next to the giant termite mound. It went in a hole and i figured it would have a great life there! Well, not only was it back, but it brought it’s partner! As we were watching, both of them plopped to the ground in the 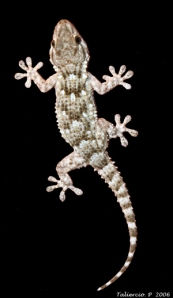 next room. The walls only go half way up so I could see it was near my bed! All the kids are gone at the moment so I told Cleo to “sick ’em!” She is now in the bedroom sniffing them out. At one stage she had one of them in her mouth but Remick’s new pup-Studley tried to get in on the fun and made her drop it! The door is shut and she is on the hunt. I sure hope she get’s them before bedtime! Heartless? I don’t think so.

It’s kind of like that in our lives. When God is on our side, HE can fight our battles for us. I am sitting here on this couch, breathing deeply, determined not to “freak out”. While my gallant, faithful Cleo is in there fighting to keep me safe. Well, they can’t really hurt you but can almost give me a heart attack! I have to remember that when I want to freak out, God is there and if I will let Him, He will undertake for me. I want to encourage you that whatever you are going through, you are not alone and God is there. And if you will let Him, He will undertake for you too.